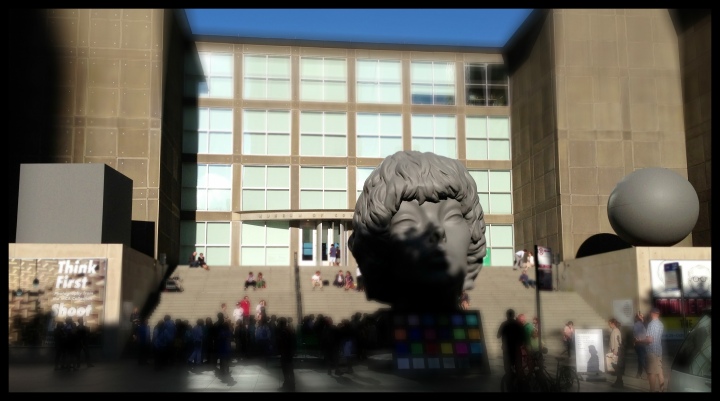 As far as public sculpture goes, the notion of an opening date seems a little odd. Unless done under total secrecy or very quickly, such large scale projects reveal themselves over time, after periods of long installation, and yet one day they are fully realized, completed and ready for public consumption. This past Tuesday, 23 July, marked such a day for The Character and Shape of Illuminated Things. 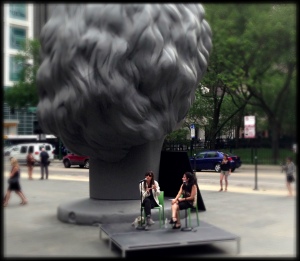 The third commissioned work in the Plaza Project series at the Museum of Contemporary Art, Chicago, the occasion was marked with an outdoor talk with the Chicago-born, Los Angeles-based artist Amanda Ross-Ho and MCA curator Julie Rodrigues Widholm; speaking at the height of rush hour, on a beautiful, if blustery Chicago summer afternoon, the receding sunlight streaming through the skyscrapers surrounding the MCA. I mention the artist talk, not only because the idea was both insane (honking cabs! emergency sirens! random tourists wandering around!) and a perfect, surprisingly successful venue for discussion of a work that by its placement alone is meant to engage and implicate the public, but also because it threw into sharp focus some of the stronger formal and conceptual aspects of the work on view.

The Character and Shape of Illuminated Things takes its title and form from a series of photographs originally published in How to Control and Use Photographic Lighting, a handbook for amateur photographers from 1980 by David Brooks. The three elements in the photographs–a mannequin head with a wig, a cube, and a sphere–were selected by Brooks for their ability to replicate the majority of forms and conditions a photographer would encounter while shooting. He used the objects to show how a variety of lighting conditions would alter the translation of the subject into a two-dimensional image, presumably helping someone learn to correctly meter and light subjects to achieve the desired visual effects in a pre-digital, pre-immediate-proofs age of photography.

Ross-Ho described her process of selecting this image, getting in contact with Brooks, going to tremendous lengths to track down a duplicate of the exact mannequin head used in the source imagery, and the very long, involved process of her mostly successful attempts to replicate and scale-up these antecedents into a public sculpture group. None of the three elements making up the source photographs, and thus their sculptural counterparts as realized by Ross-Ho, however, are overly interesting visual or tactile things. Sure, the mannequin head has a sort of creepy, bizarre appeal, but overall, they read as rather bland objects, painted in 18% grey (the preferred color to use in photographic test images). 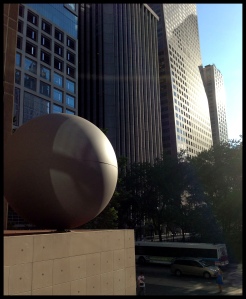 Even cognizant of the effort it took to create them, I could not help but think while looking at the sculptures that they looked rather dumb, cheap, and artificial. Further, while I understand its inclusion, I found the color calibration card, the only element not present in the source imagery, the least successful, most heavy-handed element of the work. What allure the three sculptural objects do possess, however, comes from their connection to the original source photograph, which may not be accessible to a casual passerby, from their collective presence, and perhaps most importantly, from their massive size and placement within the plaza, wonderfully displayed within the tripartite division of space created by the two architectural plinths jutting out from the building and the open area at the bottom the staircase between them. 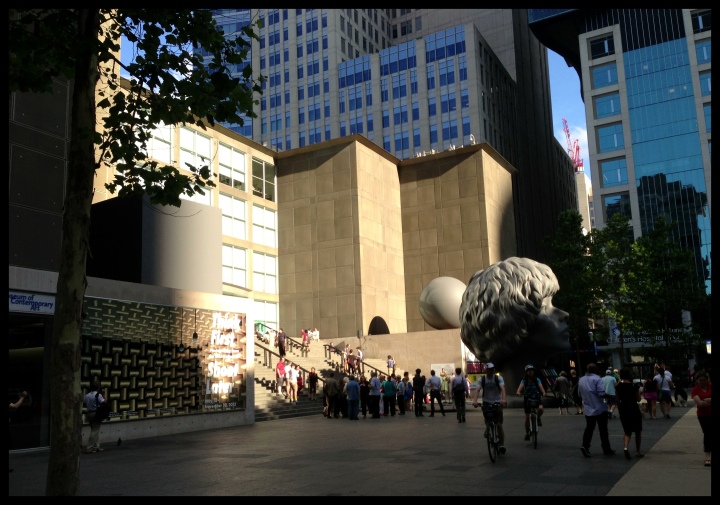 Here, Ross-Ho deftly and self-reflexively engages and manipulates the primary characteristics of public sculpture: its unavoidable presence and innate ability to demand attention. The size and scale, more than anything else about the work, is what immediately grabs you, eliciting any number of responses (wow, this is so big/awesome/stupid/silly/confusing…), and in our current age, prompts you to stop and take a photograph of or with the work. 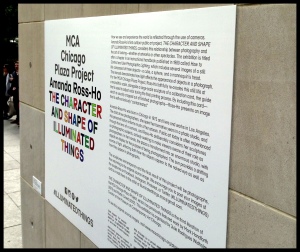 Ross-Ho discussed her interest how in the contract established between viewer, artist, and artwork, in how the expectations of this contract are played out in the ways a viewer interacts or participates with a given work, and how social media has changed this exchange. Normally, my inclination when the phrase ‘social media’ is thrown out is to desperately try and resist the urge to throw up, but its evocation in the context of this project is not just appropriate, but genuinely interesting as an a conceptual and formal underpinning of the work. 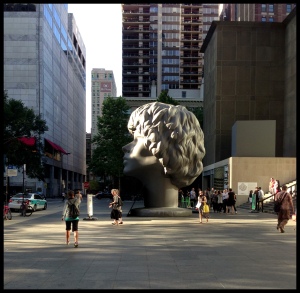 The idea is simple and has been enacted in numerous recent projects commissioned by institutions increasingly keen to engage the public through social media platforms: encourage the public to photograph the work and post these images via facebook, twitter, pinterest, etc. (#ILLUMINATEDTHINGS, for example, is prominently featured and discussed on the promotional materials for the work). So sure, a fun way to see how your fellow citizens see and filter a given work, a way to build buzz about a project, but the genius of applying this idea to The Character and Shape of Illuminated Things lies in the choice of which image to appropriate in the first place. I am not sure if I ever got the sense reading about the project or from listening to Ross-Ho discuss her process why she specifically selected the images from the Brooks’ handbook (nor do I think it necessarily matters), but the decision to select an image that was so obviously about the act and mechanics of photography immediately elevates the project beyond a summer art spectacle. What began as three-dimensional objects depicted in two-dimensional photographic images reproduced for semi-public consumption, became new three-dimensional things, which are then translated and dispersed back into innumerable digital images that exist in the real-not-real space of the internet. In this vein, The Character and Shape of Illuminated Things also recalls 3-D software such as Maya that build worlds utilizing basic geometric primitives and untextured human figures. In this oscillation between object and image, the boundaries of the work grow like an uncontrollable, living organism. Each day countless images will be taken of some aspect of the work. These photographs will show the smallest details or the overall context. They will show a work basking in morning sunlight, dramatically lit in the evening, withstanding an afternoon thunderstorm, or being overtaken by a gaggle of screaming children freed from the indoor confines of their summer camp. The Character and Shape of Illuminated Things will accumulate and fold into its constitution all of these views, becoming something multiple and expansive; a photograph made physical through sculpture and a sculpture made larger sculpture through photography.

The Character and Shape of Illuminated Things did not only have an opening date, but also has a closing one. Ross-Ho stated that the sculptural elements will not be re-installed at another location, that the work will eventually exist only through the mass of accumulated images taken by herself and the thousands of viewers, who likewise shot and possibly shared photographs of their encounters with the piece. I hope that after the removal of the piece in November that the MCA and Ross-Ho resist the urge to sell or re-install the sculpture, and allow it to stand as a transitory project, to complete the circuit from photograph to sculpture to a multiplicity of images.

A video courtesy of the MCA, showing the installation of the piece in the plaza: