A “Richard Serra” has come to designate a very particular type of sculptural thing – almost always a hulking, mass of Cor-Ten steel plates of various curvature, carefully and complexly engineered, installed, and viewed. This is sculpture that can (and has) kill a person and depending on your disposition and/or feelings about Serra, can read as impressive, oppressive, or some combination of the two. Whether seen positively or negatively, however, Serra’s sculptures undeniably makes a statement. They commandeer and define Frank Gehry-designed gallery spaces, required the Museum of Modern Art to preemptively fortify the floors of their newest building, and stand up to – and harmonize with – large swaths of majestic natural landscapes.

This brings me to  Reading Cones, or as its known to Chicagoans, ‘oh, that Richard Serra in Grant Park…’ (or perhaps more aptly, ‘oh that – ugly/weird/adjective of choice – hunk of steel with all that graffiti on in it Grant Park that smells like pee’). I cannot recall how many times I have driven, biked, or walked by it and barely given it a second thought – and this from an avowed Serra apologist, bona-fide admirer even. The thing is, the sculpture is small. A funny statement perhaps to make about a 17 ft. tall, 32 ton metal object, but in terms of scale and its relationship to its site – a massive park surrounded by the city and its distinctive buildings – the work seems, at best out of sync, and at worst, a bit dinky, to use a proper art historical descriptor.

Yes, after being donated to the City of Chicago by the Leo Burnett Company, it was astutely installed in 1990 so that its narrow seams perfectly lined up on an axis connecting southward to the Clarence Buckingham Memorial Fountain across Butler Field, but Reading Cones, unlike Serra’s other urban sculptures that have become known, sometimes controversially in the case of the infamous Titled Arc, for their site specificity, feels as though it has little to do with its location or the City of Chicago. The title, for example, refers not to where it resides, but to Reading, Pennsylvania, where it was fabricated. Further, the sculpture was initially a temporary installation as the City had intended to move it to State Street, one of the main arteries just west of its now seemingly permanent site.

All of these characteristics, these incongruities in relation to Serra’s greater oeuvre, however, are what make me actually genuinely appreciate the work. Sure it is a bit awkward and has suffered at the hands of numerous acts of vandalism by those who are perhaps not as appreciative as I am of its subtle yet imposing presence, but Reading Cones is an amazingly dynamic sculptural thing. For sculpture nerds like me, it foreshadows the formal effects Serra would go on to achieve in his masterful ‘Torqued Ellipses’ of the 1990s and 2000s, but beyond its art historical significance, the piece capitalizes and manipulates sculpture’s ability to generate a multiplicity of views and experiences. I love how the appearance of the work drastically changes depending on where you stand and where you look.

Reading Cones is a thing that the viewer can walk not just around but through, a structure unavoidably in dialogue with the architecture surrounding it. The sculpture may not be site specific but it is still very much activated by the specificities of its location. It frames and is framed by its surroundings; its narrow openings, cut for a single viewer to walk through, and curving edges producing fleeting, living compositions. 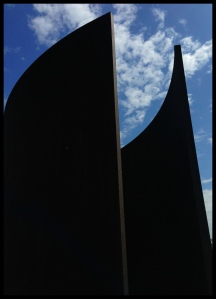 Unlike so many Serras’ that unapologetically profess the sheer power of their material, the experience of  Reading Cones is quieter and allows more space for the other physical elements implicated by the presence of the sculpture, including the climatic conditions and the urban context, which often alters the site during Chicago’s numerous outdoor festivals and public events. There is also the human element, the viewer that sets the whole thing in motion. The next time you are on E. Monroe St. in Chicago, just west of the Lake, keep an eye out for that Richard Serra in Grant Park. It is just sitting there, waiting for you.

One thought on “That Richard Serra in Grant Park…”